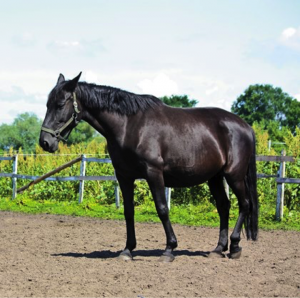 Horses developing laminitis might shift the weight off their feet twice as much as they do normally. Photo: iStock Your horse’s best chance of overcoming this hoof disease might lie in your ability to catch it early It’s a painful condition that veterinarians, farriers, and horse owners have been racking their brains about for decades. Laminitis—the separation or failure of laminae, which connect the hoof wall to the coffin bone within—can cause permanent structural changes in a horse’s foot, leading to repeated bouts of disease and lasting lameness. In severe cases the pedal (coffin) bone in the hoof rotates downward, potentially even puncturing the sole and prompting the decision to euthanize. But get this: Watchful handlers can actually detect signs of laminitis in its early stages and intervene before the condition becomes debilitating. “Everyone talks about laminitis being a lameness issue, but we know that horses start to get damage at a microscopic level before they show any lameness,” says Andrew van Eps, BVSc, PhD, MACVSc, Dipl. ACVIM, senior lecturer and specialist in equine medicine at The University of Queensland Equine Hospital, in Gatton, Australia. Therefore, keeping an eye out for minute changes in your horse’s health is key to maximizing his likelihood of recovery, says Tom Ryan, FWCF, a researcher and farrier based in Bedfordshire, U.K. “You have to be proactively thinking ahead,” he says. To help you catch this devastating hoof disease while your horse still has a chance to avoid suffering its consequences, our sources have helped us come up with a list of 10 early warning signs. Regardless of the type of case (-supporting-limb, systemic inflammatory response syndrome, or endocrine disease-related), these red flags could indicate laminitis is setting in—even before you see any signs of lameness. So alert your veterinarian as soon as possible if you detect one or more of the following: Slide your hand down the side of your horse’s lower limb where the digital artery runs through the groove between the flexor tendons and the suspensory ligament. Where the artery continues down the back of the fetlock you should be able to feel his pulse. Normally, the pulse should be faint or even seem absent, says Ryan. But in laminitic horses it will be stronger and is often referred to as “bounding.” How do you know what’s strong or bounding? “You kind of have to feel to know,” he says. Ideally, you should get to know what’s normal for your horse’s digital pulse. A strong digital pulse can indicate other foot pain, as well, but a bounding digital pulse in both feet is a major clue that laminitis is to blame. Healthy horses can have hot hooves, says van Eps, but not for long periods of time. It’s normal for horses to experience large influxes of blood into their feet periodically, which causes hoof temperature to rise. But the body regulates this heat, and it should only last a couple of hours at most—unless it’s hot outside. In other words, there’s no need to panic if your horse has been standing in a sunny field on a 90-degree day and his hooves are hot. The time to worry is when hooves reach 91.4°F (33°C) for several hours in a row and the outdoor temperature is lower than 77°F (25°C). “That’s a sign they could be getting laminitis, and that’s what we’ve seen experimentally,” van Eps says. That increased temperature, says Ryan, is the hoof’s response to the trauma within the laminar tissues. Sometimes lameness follows quickly. “We see lameness begin eight to 12 hours after that temperature increase,” van Eps says. If you don’t think you can estimate surface temperatures well with your fingers, van Eps recommends using an infrared surface temperature gauge from a hardware store. Healthy hooves grow faster in the dorsal (front) part of the hoof and slower in the quarters, says Ryan, creating smooth, wide, evenly spaced growth rings across the front of the hoof wall, which can be slightly closer together at the quarters. With laminitis, that growth pattern no longer applies; because the growth at the heels is now more rapid than at the toe, the horse develops wider growth rings at the heels. Currently, says Ryan, we don’t understand why the heels grow faster than normal in laminitis. This altered pattern causes the hoof’s rings to curve upward and abnormal rings to develop on the hoof wall surface, which can precede lameness sometimes by months or years, says Donald Walsh, DVM. Walsh leads the Animal Health Foundation, in Pacific, Missouri, which funds research and education projects related to laminitis. Ryan believes abnormal hoof growth starts before all evidence of pain, causing the laminae to be traumatized when the hoof capsule changes shape around the underlying pedal bone. He’s been investigating the pain-relieving properties of cutting vertical grooves into laminitic horses’ hoof walls, with the intention of reducing the effect of the distortion. The small strip of horn removed protects the dorsal laminae by isolating it from the rapidly growing heel. “Early grooving appears to protect the laminae from the more severe effects of hoof capsule distortion,” he says, adding that research is pending on this theory. “Our experience indicates that if you can do it very early on, you can see pain relief within hours.” A strong or bounding digital pulse in both limbs is a clue that laminitis is to blame. 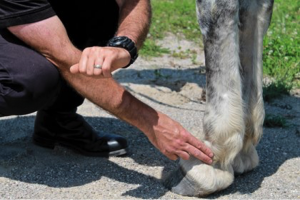 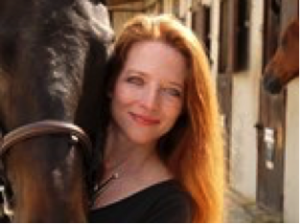